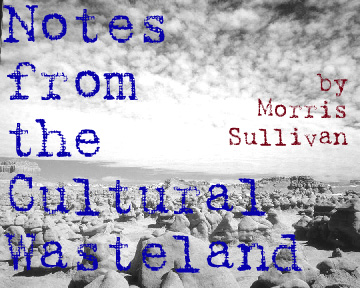 My twelve-year-old son and I drove toward Ocoee. He had asked me something, and I hadn’t responded. “Dad,” he asked, “What are you thinking about?”

As often happens when I’m driving, I was writing in my head. “Trying to come up with something for my column. Got any ideas?”

“Why don’t you write about how people get suckered in advertising? Like how you’ll see a perfume ad, and there’ll be a really beautiful girl with a really good-looking guy, and a woman will think that if she buys that perfume, then she’ll be beautiful like the girl and have a great-looking guy, too.”

Smart one, that boy of mine.

We started talking about how people perceive themselves and how they compare themselves to the people they see on television and movie screens. I explained that models—female models, especially—are not, in fact, representative of human perfection, but that they are so far from the norm that they’re freaks of nature.

I mentioned that I’d read an interesting exchange between a local fashion designer and a critic. The critic noted that some of the models displayed “the sag of gravity” through their see-through tops. The designer pointed out that her fashions weren’t all for people with perfect bodies; therefore, her models didn’t have to be perfect. That’s a pretty brave choice for her to make.

Maybe this kid’s a little too smart.

“Well,” I said, “They’re kind of abnormal, too, in other ways.” I reminded him of a woman we’d once met and asked him if he’d thought, from what she looked like when he met her, wearing a baggy sweat-shirt and shorts, that she was a beautiful girl who posed for Penthouse and swimsuit calendars. He didn’t.

I explained that, besides surgical enhancement, a lot happened in the photographer’s studio to change the “real” woman into the fantasy one. I told him about how a computer-graphics artist makes a super-model even more perfect by shaving off an inch of thigh here, adding an inch of bust there, making her eyes a little bluer, and smoothing out a few wrinkles.

I told my son that the problem with media’s presentation of women—and often of men, too—was that it gave people an unrealistic idea of what life was supposed to be like. “If you expect your girlfriends to look like the ones in the magazines, you’re going to be disappointed—just like if your girlfriends expect you to be rich, suave, adventurous, athletic, brave, and intelligent like the guys in the movies, they’ll be disappointed, because you can’t always be all those things.”

Speaking of porno mags, I saw The People Versus Larry Flynt, in which Oliver Stone makes a hero out of a guy who not only has helped to perpetuate the myth that women need huge breasts in order to be attractive, but that they’re all essentially sex-toys for simple-minded libidinous males. A recent issue of Hustler features a photo of “The Perfect Woman,” who menstruates through her mouth (so she’ll have to be quiet for a week out of every month), has a detachable butt, leaks bourbon and milk from her breasts, and worse. To Hustler’s credit, however, only about half the models appear to have surgically-enhanced breasts.

Perhaps worse than the physical unreality represented in magazines like Hustler is the behavioral unreality. What image of women do men, especially young, impressionable men, get from reading and looking at magazines, videos, and, for that matter, television? How do they expect them to act? Are they disappointed when their real-life girlfriends and wives don’t fulfill the sexual fantasies promised by the media?

It sometimes seems that all you have to do to earn admiration in our society is to be more beautiful than most people—and, preferably, better in bed. In earlier centuries, society’s heroes were people who had received a call and heeded it, and in the process overcame obstacles, acquiring power and knowledge over themselves and their world. Women in such stories represented not only beauty, but ideals such as purity, fidelity and a spiritual connection to the higher purposes of human life.

Granted, women in mythology were often subservient to men, but when a female became a hero, it was because she’d managed to transcend the day-to-day material concerns of male society—waging war and killing food—and had established for her society a new connection to the things that lay beyond those humdrum, material concerns.

My son and I arrived at my brother’s house in Ocoee. We were there to visit our newest relative, my five-day-old grand-niece. He looked at her only briefly—he’s a little too caught up in 12-year-old cool to be too interested in babies—then settled on the couch to watch television with his uncle.

I cradled the infant against my forearm, looking at her, then at the family gathered in the living room. She’d brought them together in more ways than one. In one heroic act—emerging into this world—she’d defeated dozens of obstacles and knocked down numerous walls that had been keeping people apart.

She was pretty small for a heroine. Her body would almost fit in the palm of my hand. She smiled at the sound of my voice and opened her dark, tiny eyes. As she grinned and grunted, I gazed at the fine detail of her lips and the little hands with their flawless fingernails. They were almost too beautiful to be real, as if they were etched on crystal.

I wondered if she’d ever know that she was perfect.

Back to October/November '97 Issue